Life and works of the founders of "Bureau des longitudes" 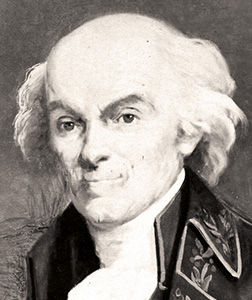 Born in 1732 in Bourg-en-Bresse, France, died in 1807 in Paris. He participated in the determination the Earth-Moon distance in 1751, and was admitted to the Academy of Berlin and to Academy of Sciences of Paris in 1753. In 1759 he published tables of positions of planets and comets. In 1760 he was responsible for the making of the "Connaissance des temps". In 1762 he succeeded to Delisle as professor at the Collège de France. He was director of the Paris Observatory from 1795 to 1800. In 1801 he published a French History of Heavens in collaboration with his nephew Michel de Lalande. He wrote the two volumes of the History of Mathematics of Montucla dedicated to the eighteenth century 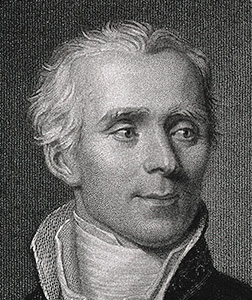 Born in 1749 in Beaumont-en-Auge, France, he died in 1827 in Paris. Appointed professor of mathematics at the Royal Military School when he was twenty thanks to D'Alembert, he was elected to the Academy of Sciences of Paris in 1783. Promoted as Count by Napoleon, he supported Louis XVIII who promote him as Marquis and peer of France. In 1796 he published his "Exhibition of the world system" which contains his cosmogonic hypothesis that the solar system is from a primitive nebula. He also published between 1798 and 1825 his "Celestial Mechanics", gathering the consequences of the universal gravitation, and in 1812 his "Analytical theory of probabilities." He also studied physics and chemistry with Lavoisier and enunciated basic laws of the electromagnetism. 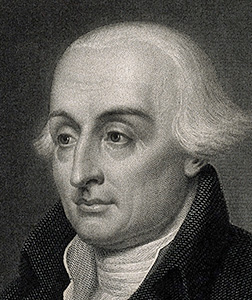 Born in 1736 in Turin, Italy (at that time depending on the dukes of Savoy), he died in 1813 in Paris. Professor at the School of Artillery of Turin in 1756, he founded the Academy of Sciences of the city. In 1766, he is called to lead the mathematics section of the Academy of Sciences of Berlin. Member of the Academy of Sciences of Paris since 1772 he teaches at the "Ecole Normale" and at the "Ecole Polytechnique" and chairs the Committee on Weights and Measures. He demonstrates several theorems relating to the theory of groups and preparing the work of Galois. His "Analytical Mechanics" published in 1788 unifies the foundations of mechanics and applies the Newtonian theory to planetary motions. In his "Theory of analytical functions", published in 1797, he defines all functions by series expansion of Taylor. His differential equations of motion of celestial bodies are still taught today. 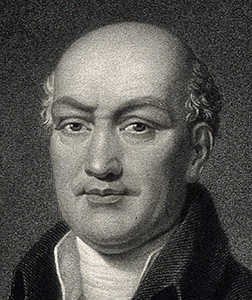 Born in 1749 in Amiens, France, he died in 1822 in Paris. He is known for his observations of Jupiter's satellites that he gathered and for the tables of the satellites and those of Saturn which he published in 1789. He was a student of Lalande and measured with Méchain the meridian arc from Dunkirk to Barcelona to found the metric system. He became perpetual secretary of the Academy of Sciences of Paris in 1803. From 1804 to 1822 he was director of the Paris Observatory. He wrote a "History of Astronomy" published between 1817 and 1827. 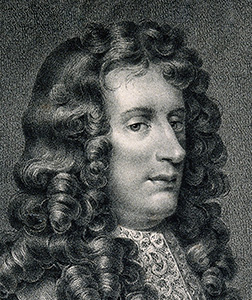 Born in 1748 in Paris, he died in 1845 at Thury-sous-Clermont, Oise. Coming from a family of astronomers, he completed the large map of France begun by his predecessors. In 1784 he succeeded to his father as director of the Observatory of Paris and was appointed as member of the Academy Science of Paris in 1779. 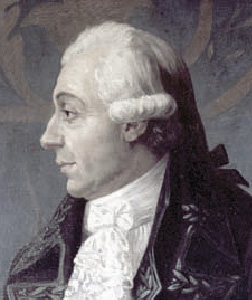 Born in 1744 in Laon, he died in 1804 at Castellón de la Plana, Spain. He was appointed member of the Academy Science of Paris in 1782. He was responsible for the "Connaissance des Temps" from 1784 and checks the difference of longitude between Paris and Greenwich in 1787 with Cassini and Legendre. He participated with Delambre to the measurement of the meridian from Dunkirk (Dunkerque) to Barcelona, ​​for the creation of the metric system. As an observer, he discovered many comets. He headed the observatory of Paris from 1800 to 1804.

Born in 1733 in Dax, France, he died in 1799 in Paris. He entered in the Military engineering, he wrote in 1756 a "Memorandum on the motion of projectiles". In 1771 he went on a mission on the "Flora" to try marine watches of Berthoud. He was appointed a member of the Academy of Sciences of Paris in 1764 and met Cook during his travels. He perfected instruments navigation and develops a "reflecting circle" that bears his name. He was taken prisoner in a battle against the English fleet in 1778. In 1784 he was appointed inspector of naval building and led the science operations to bring to the establishment of the metric system. 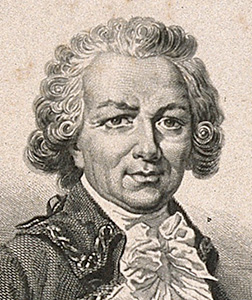 Born in 1729 in Paris, he died in 1811 in Paris. After studying mathematics (Treaty of integral calculus, 1749-1756) and law, he made a military career. Entered in the navy in 1763, he began with the naturalist Philibert Commerson an expedition around the world (1766-1769) during which he discovered several islands of Polynesia and he told his discoveries in his famous "Voyage around the world". He was appointed member of the French Institut shortly after his foundation in 1795. 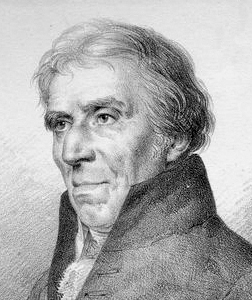 Born in 1741 in La Neuville-au-Pont, France, he died in 1825 in Paris. Geographer, he was charged in 1788 to draw bailiwicks maps of the kingdom. He was appointed to Academy of Sciences of Paris in 1770.