ESPaCE‑2 is the extension until 2020 of the European project FP7-ESPaCE (European Satellite Partnership for Computing Ephemerides, 2011-2015). This project is coordinated by IMCCE since 2011 and associates four of the seven partners from ESPaCE: IMCCE, TUB (Technische Universität Berlin ), TUD (Technical University of Delft), JIVE-ERIC (Joint Institute for VLBI in Europe). The goal is mainly to cooperate for the improvement or the development of ephemerides of natural satellites by exploiting new space based or ground based data issued either from archives or from observing campaigns.

FRIPON (Fireball Recovery Interplanetray Observation Network), was conceived for three main objectives: i) determine the source region of various meteoritic classes; ii) collect fresh meteoritic matter and iii) perform scientific outreach. FRIPON objectives are achieved mainly based of more than 100 allsky cameras for the surveillance in the visible, and more than 20 radio receivers. The network uniformly covers the France’s surface. 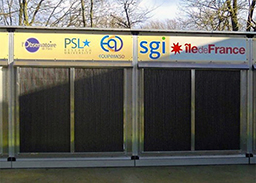 MesoPSL is the parallel computing center of PSL, member of the equip@meso project. It federates the users in intensive calculus within the large establishments of PSL (ENS, Observatory of Paris, Chemistry Paris, ESPCI, Paris Dauphine University…) by creating a community of researchers and numerériciens engineers. MesoPSL now hosts more than 50 projects in all disciplines. His machines help to understand the structure of extra solar planets, the properties of luminescent organic switches, the origin of the earth dynamo, or the arithmetic properties of whole numbers.
MesoPSL is installed on the Meudon site, in a container with particularly efficient direct air cooling with a PUE of 1.02. MesoPSL is accessible to all PSL researchers. Resources are allocated by its steering committee, on project. The requests are made over the water through the user interface of the MesoPSL website (www.mesopsl.fr). 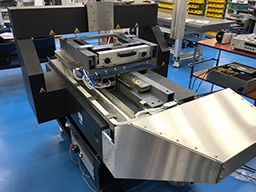 The NAROO (New Astrometric Reduction of Old Observations) digitization centre is a project supported by IMCCE, IPSA, DIM-ACAV, PSL, Paris Observatory, and PN GRAM. The NAROO digitizer is a new-generation sub-micrometric instrument for astro-photographic plates, dedicated to the Solar System metrology, and more generally, that of our Universe. The main goal is to provide new astrometric positions over long time spans for planets, natural satellites and small bodies, typically from 1890 to 2000 but with the milli-arcsecond accuracy. This work be used to improve the dynamical models of these bodies, to detect and measure the smallest cumulative effects, and to propose formation and evolution scenarios. For further details, please refer to the PSL page dedicated to the NAROO project. 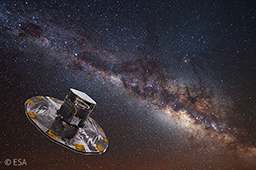 The astrometry space mission Gaia is an ESA (European Space Agency) cornerstone mission, aiming to provide a census and a kinematic cartography in 3 dimensions of our Galaxy, and beyond. This ambitious project brings an unprecedented harvest of data and will beat some records at the end of his 5 years of mission: 1 billion pixels in space, to observe 1 billion stars, and measured with precision of 1 billionth of a degree (μarcsec), and ultimately collect a million billion bytes of data (PetaByte). In addition to the stars and extragalactic sources, Gaia regularly and continuously observes about 350,000 asteroids—about half of the known population—and other bodies of the Solar System, down to magnitude V ≈ 20.5. All the data is processed, reduced and analyzed by an European consortium of researchers and engineers, DPAC. Astrometric, photometric and spectroscopic data of these bodies will provide a huge leap in our knowledge of the Solar System, or on fundamental physic tests (mass determinations, Yarkovsky effect detection, age of collisional families, stellar occultations prediction, gravitation tests…). In addition, the Gaia-FUN-SSO ground-based observation network has been set-up to carry out observations on alert, and to follow up newly discovered objects (including those of the GBOT program...). Gaia has already provided a large amount of data through several intermediate catalogs: DR1, first data release in 2016, DR2, second data release in 2018, eDR3, early data release in 2020, and DR3 third data release in 2022, with the latter three catalogs providing data on solar system objects directly.

The European project NEOShield aims at performing scientific research and technical development to reduce the geo-risk from Near-Earth Objects (NEOs) impact. NEOshield brings together several partners in a research consortium to lead technological and scientific developments around the mitigation of near-Earth asteroid hazards. The objective is to provide technological developments for kinetic impactors or other type of space missions to deflect a threatening asteoid, and to provide a better characterization of NEO properties. In particular, the rotation periods of target asteroids were obtained from observation campaigns on ground telescopes; validation of the deviation senarios is carried out by the Post-Mitigation Risk Assessment Tool (PMiRA). Based on this research, NEOTwIST offers a demonstration mission and the Impact calculator tool. These studies are funded by the European Commission in its FP7 and H2020 framework programs, their results are available here: NEOShield1 and NEOShield2.

The goal of the H2020 European project Europlanet-Research Infrastructure is to set up a structure linking the European laboratories of planetary sciences. In this framework, Europlanet help them to develop and to give access to databases and related services, to share excellent experimental tools, and more generally it fosters international cooperation between researchers in planetary sciences. IMCCE is a member of Europlanet, in particular in activities regarding the dynamics of asteroids, their physical and shape characterization, and the study of meteoroid streams.

VESPA (Virtual European Solar and Planetary Access) is an important workpackage of Europlanet 2020. Its goal is to build a Virtual Observatory in planetology. VESPA gives therefore access to a wide selection of VO compliant data in planetology and to VO tools useful to explore these data, to vizsualize them, to make cross checking and to apply models. IMCCE has contribution to this activity, in particular by delivering the DynAstVO database regarding the Near Earth Objects and synchronized on daily updates.

The “Domaine d’Intérêt Majeur”, of the Île-de-France region, supports research in the fields of Astrophysics and the Conditions of Appearance of Life.

ESEP is the French acronym of “Exploration Spatiale des Environnements Planétaires”, or “Space Exploration of Planetary Environments”. The idea of ESEP is to serve as a lever for collaboration and synergy between nine Space Exploration and Technology laboratories in and around Paris and Orléans, France. The strategic goal is to connect and exploit complementary know-how between the laboratories and foster R&D projects for new space instrumentation, projects that could not otherwise exist.

The Space Geodesy Research Group (GRGS) is a scientific consortium that brings together 12 French research teams. Each of these teams belong to national institutions that work in space geodesy

Whether life is singular or abundant in the universe has been a central question since the oldest times. It resonates in the background with fundamental questions that have been the subject of passionate and sometimes irrational debates throughout time: what is life, how can life emerge spontaneously from non-living systems, what is the probability that life will emerge, what are the conditions for the emergence of life, are they unique to the Earth or multiple in the universe, can we find it if it is the case? The OCAV project addresses these outstanding questions at the level of PSL Research University by stimulating and focusing the work of a pluri-disciplinary community of researchers expressing their interest in this area

IMCCE is part of the project PSL-Maths. This project gathers a large variety of research units of Paris-Sciences et Lettres, from the mathematics laboratories (ENS, université Paris-Dauphine) to smaller teams belonging to laboratories whose main theme of research is not mathematics. The goal is to boost interactions among these research units, both for research and teaching.