The τ-Herculids meteor shower (IAU #61) is known to be caused by comet 73P/Schwassmann-Wachmann 3. The comet is famous for having an important ourbuts in 1995, resulting in several fragments, particularly well observed during the 2006 perihelion return.

Back in 2005, we asked the question whether or not the meteoroids ejected during this event would cause a τ-Herculids (hereafter TAH) ourburst. Our conclusion was negative, but some older material (ejected during the 19th c.) will definitely cause a shower enhancement in 2022. However, our study considered classical meteoroid ejection from the comet, and neglected the effect of the 1995 outburst.

In 2021, Joe Rao published a study showing that if the meteoroids are ejected at higher velocity, they will definitely cause a TAH ourburst. Rao also explored the influence of the change of the comet orbital elements.

In this (short) study, we confirm Joe Rao's finding and go slightly further, exploring the conditions that makes the shower possible, as well as the observation optimization.

How to bring the meteoroids ejected by comet 73P to the Earth in 2022?

Taking our good old model of meteoroid ejection and evolution in the Solar System, we find that the ejection velocity must be at least 2.5 time higher than the one computed with a regular Crifo & Rodionov (1997) model to make it to the Earth in 2022.

The reason is quite simple: a higher ejection velocity brings the meteoroid further from the nucleus. What matters here are the meteoroids located in front of the nucleus. This is illustrated in the figure below, where a comparison between a factor of 2.0 and 2.5 is drawn.

Now the crucial question is: how realistic is a 2.5 ejection velocity factor? Crifo & Rodionov (1997) model involves the "fa" factor: fraction of active area. This parameter is usually computed from the comet dust production rate and is lower than 1.0 (1.0 means that 100% of the surface of the nucleus is outgasing). Usually, "fa" is "small", i.e. around 0.1 (meaning that 10% of the surface is active). Now during a comet outburst, a simplistic computation of "fa" might lead to fa>1. This is because during an outburst, the regular outgasing process is negligible compared to the physical processes really going on. We can see that "fa" is proportional to the gas production rate. Given that the comet gas production rate increased by more than an order of magnitude during the 1995 outburst, we multiply "fa" by 10.0 in the computation of the ejection velocity. This leads to an increase of a factor 2.7 for the ejection velocity . As a consequence, an increase of the ejection velocity of a factor 2.5 during the 1995 outburst of comet 73P is totally realistic.

Our work suggest that the trail ejected during the 1995 passage will encounter the Earth on the 31st of May 2022, with a peak centered at 05:01 UT, i.e. similar to what previous studies have found. 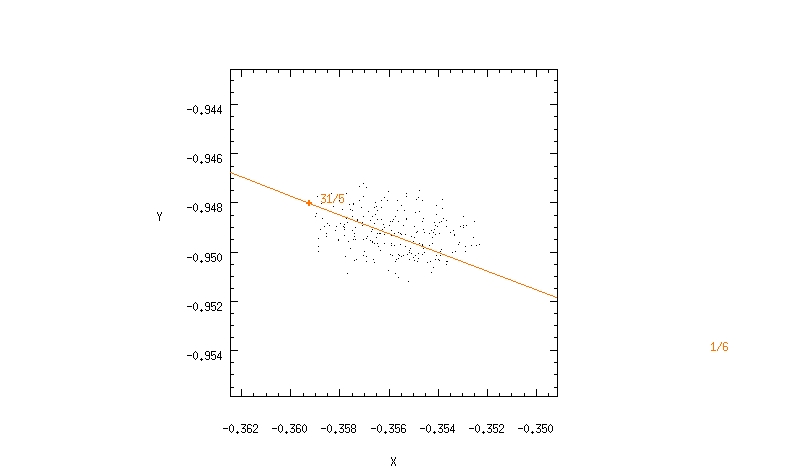 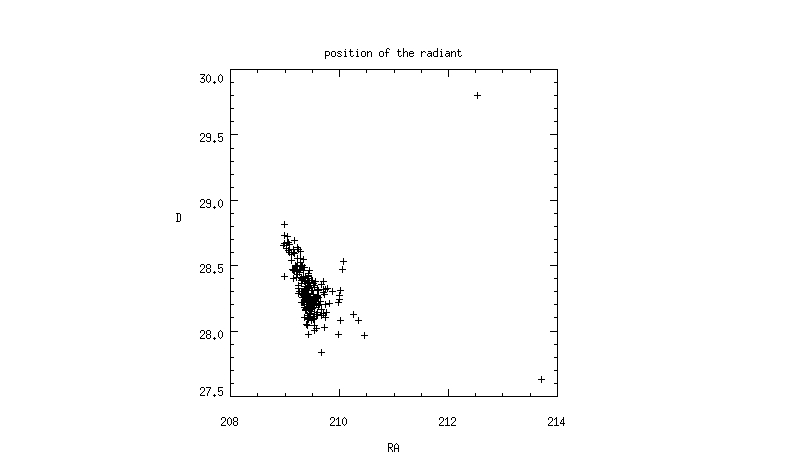 The encountered velocity is rather slow, at 12 km/s, making the level of the shower quite hard to predict.

The subradiant point is located in Baja California, Mexico, at the time of the maximum. 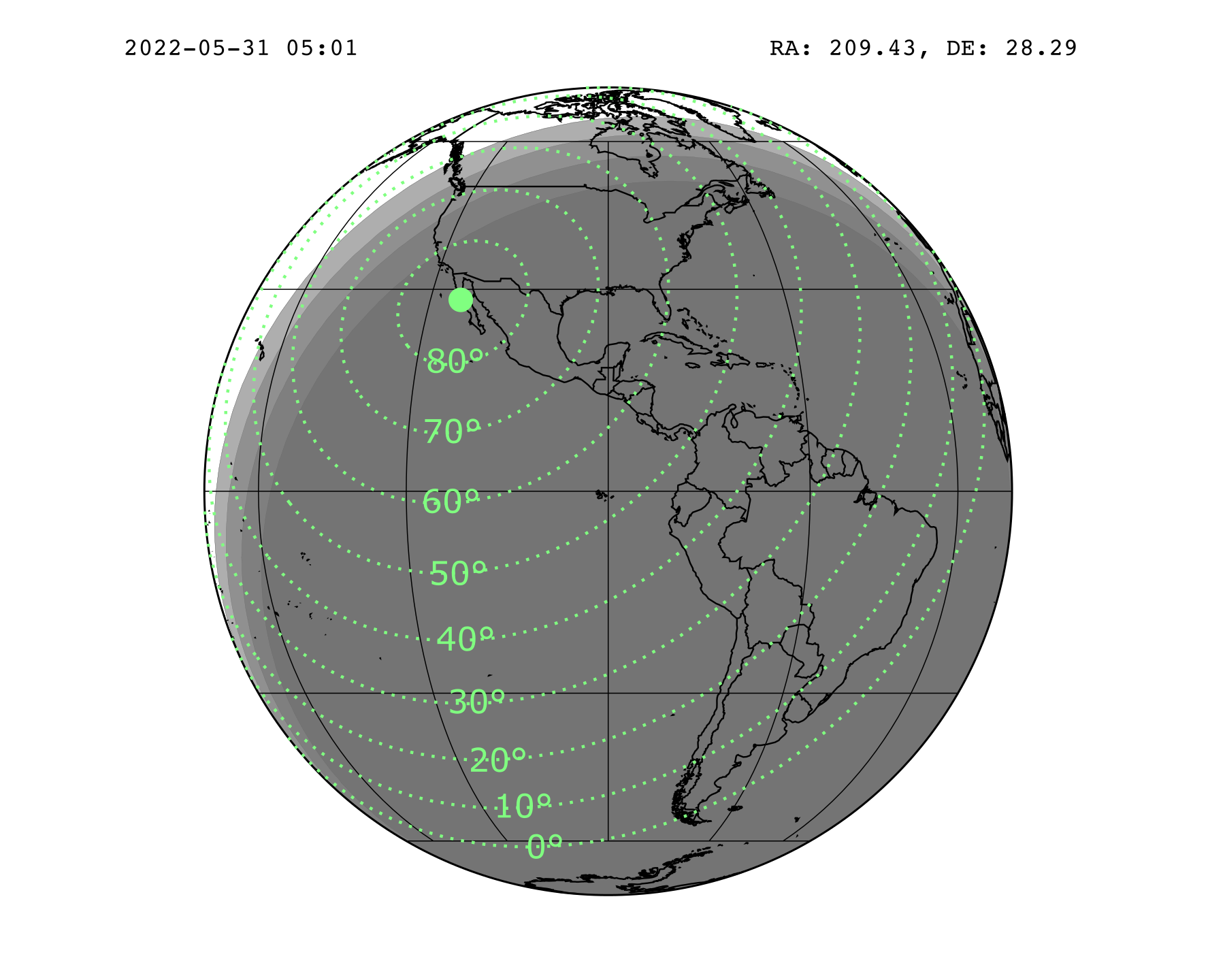 In addition, older trails ejected in 1892 and 1897 will likely cause two other outbursts. 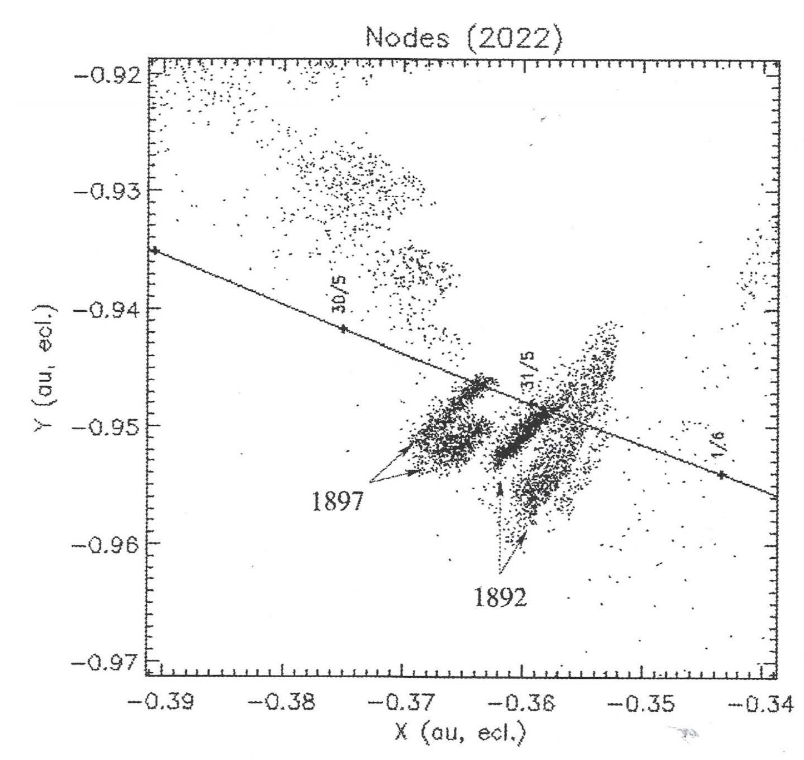 As usual in meteor sciences, this is one of the least known parameter. There are 2 main uncertainties about this expected shower: 1) was the outburst violent enough to produce the desired ejection velocity? As seen above, this seems totally reasonable, but until the 31st of May 2022, nobody really knows. 2) given the very low entry velocity, most meteoroids are expected to produce dim meteors, making the number of observed meteors by naked eye rather low. If any outburst happens, it might be best detected with the Canadian radar (CMOR). Or, we might see a fantastic display of numerous meteors, as during the 1933 Draconids... Who knows? THAT's what is exciting about meteor sciences: whatever you do, be ready for surprises! And bad surprise (e.g. very low ZHR) will, in all cases, tell us something about the science of comets, meteors, meteoroids, and Solar System celestial mechanics.

Optimization of the 2022 τ-Herculids observations

As pointed out by J. Rao and our work above, the subradiant point at the time of the maximum will be located in Baja California, Mexico. As much as possible, ground based observation must be setup as double stations in order to measure orbits of meteoroids, derived 3D trajectory and deduce the tensile strength etc. Airborne campaign (if any) would ideally be double-airborne as well. If only one aircraft is flying, a coordination with ground-based stations must be established, and the fight plan organized so that most meteors observed from the aircraft are also observed from the ground. GPS timing is therefore an extremely high priority especially if the level of the shower is high (in order to find which meteor is really a multiple-station). Similarly, the knowledge of the exact location of the aircraft (ideally better than 10 m) at any time is required.

From Arizona, USA, at the time of the maximum, the radiant will be located towards the North-West. A double-station network is therfore desired in the North-East - South-West direction, so the trajectory of the meteors are nearly perpendicular to the baseline.

Airborne observation of the 2022 τ-Herculids

The flight plan was designed to pass between several ground based stations of the Global Meteor Network, as well as cameras deployed by the Comenius University (Slovakia), to allow the triangulation of the meteors.

The 2022 tau-Herculids started well before take off (03:00 UT), most likely due to the old trails ejected before 1950. Given the relative high number of meteors recorded around the expected time of the maximum of the outburst caused by the 1995 trail, we are confident that we have detected this trail.

We are currently working with the LIP6 laboratory (L. Lacassagne, M. Millet, M. Bouyer, F. Lemaitre, A. Cassagne) for autonomous and real-time meteor detection and data reduction. This work is in progress at the time this page is being written. Application to the Meteorix NanoSat project will be an outcome of this work.